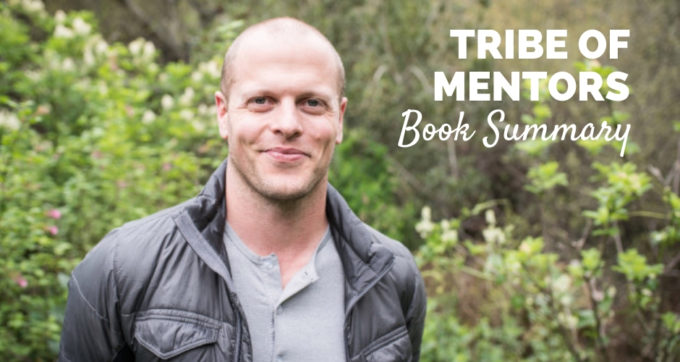 This book contains practical and tactical advice from the most impressive world-class performers in the world who have found solutions. Whether you want to 10x your results, get unstuck, or reinvent yourself, someone else has traveled a similar path and taken notes.

Who is this book for?

This book contains practical and tactical advice from the most impressive world-class performers in the world who have found solutions. Whether you want to 10x your results, get unstuck, or reinvent yourself, someone else has traveled a similar path and taken notes.

Tim Ferriss is author of three #1 NYT/WSJ bestsellers: The 4-Hour Workweek, The 4-Hour Body, and The 4-Hour Chef. He is also a start-up advisor specialising in positioning, PR, and marketing (Uber, Evernote, etc.). When not damaging his body with abusive sports, he enjoys chocolate, bear claws, and Japanese animation.

I’ve structured the summary in a way that answers each one of the 11 questions that Tim Ferriss asked in the book. I’ve identified patterns and common answers (which I mention in the beginning of each chapter), and then I highlight the most interesting and memorable answers I’ve found. Ready to dissect Tribe of Mentors by Tim Ferriss?

What purchase of $100 or less has most positively impacted your life in the last six months (or in recent memory)?

It’s not the ‘thing’ that’s valuable – it’s what it means for you. The most memorable less-than-$100-purchases were the following:

What is the book (or books) you’ve given most as a gift, and why? Or what are one to three books that have greatly influenced your life?

Many masterpieces have been mentioned. Tim Ferriss put together a list of all the books, which can be found here. The top 5 books of the list were:

If you could have a gigantic billboard anywhere with anything on it, what would it say and why? So many interesting quotes. If I were to pick the best ones, they would be:

How has a failure, or apparent failure, set you up for later success? Do you have a “favorite failure” of yours? The overall sentiment of the answers painted a ‘rags to riches’ narrative, which is universal. Failures have shaped successful people. They brought them closer to their real self. “Sometimes… not getting what you want opens the door to getting what you need.” as Mike Maples Jr. said in the book.

The best in the world have demystified failure. Out of the brilliant stories of the book (please read it), here’s 3:

I also feel I need to mention these lines by Ben Stiller:

“With movies, you learn that the true mark of “success” is whether people still connect years later. If the movie has a “life.”

YOU choose the ‘end’ mark that determines failure or success.

What is one of the best or most worthwhile investments you’ve ever made? (Could be an investment of money, time, energy, etc.)

There was a pattern there. Most successful people chose these 3 things:

The most memorable investments, in my opinion, were:

In the last five years, what new belief, behaviour, or habit has most improved your life? Again, there were common patterns amongst the answers, such as: Meditation – Walking – Sleeping well – Working out – No-sugar diet – Expressing gratitude.

The most interesting replies:

What is an unusual habit or an absurd thing that you love?

Even the best in the world are human. Here’s a few unusual habits they love!

In the last five years, what have you become better at saying no to (distractions, invitations, etc.)?

Saying no is tough for everyone, however it seems the most successful people say no… to almost everything.

When you feel overwhelmed or unfocused, or have lost your focus temporarily, what do you do? Again, the popular patterns include taking frequent breaks, meditation, working out, walking, and making lists. The most memorable ones:

I loved Richa Chadha’s answer. She has a few approaches, including the “so what” exercise: she makes a statement and asks herself “so what?” at the end:

What are bad recommendations you hear in your profession or area of expertise? There’s a diverse range of answers here. To me, the following ones stood out:

What advice would you give to a smart, driven college student about to enter the “real world”? What advice should they ignore?

The overall consensus here is that long-term thinking, embracing adversity, persisting, exploring, and being kind & respectful towards others is the way to go. My favourite advice are below:

The 4-Hour Workweek by Tim Ferriss. Whether you are an overworked employee or an entrepreneur trapped in your own business, this book is the compass for a new and revolutionary world.

Tools of Titans by Tim Ferriss. This book shares the tactics, routines, and habits of billionaires, icons, and world-class performers.

Guidelines is my eBook that summarises the main lessons from 33 of the best-selling self-help books in one place. It is the ultimate book summary; Available as a 80-page ebook and 115-minute audio book. Guidelines lists 31 rules (or guidelines) that you should follow to improve your productivity, become a better leader, do better in business, improve your health, succeed in life and become a happier person.

1. Buy the physical book, keep it in your library, and revisit often or download the eBook on Amazon.

2. Browse the list of popular books (chapter 2) and start reading.

3. Find a successful person that’s accessible to you, and ask them to be your mentor.

This summary is not intended as a replacement for the original book and all quotes are credited to the above mentioned author and publisher.