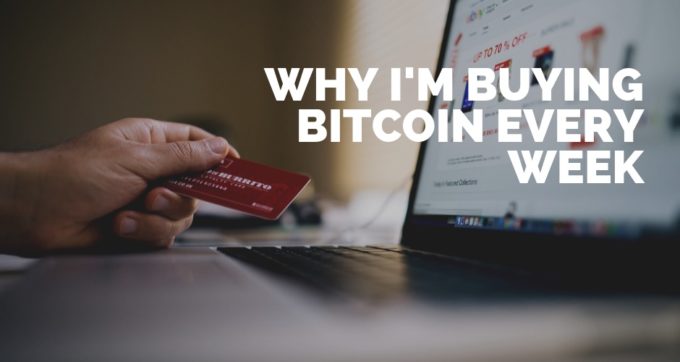 A few months ago I posted a conversation with my good friend, Denym Bird, all about Bitcoin. Since this episode was released, I’ve continued to learn more about Bitcoin and become more optimistic about its future.

Today, I’d like to explain a little more about why I believe Bitcoin is the future and why I’m buying small amounts of Bitcoin each and every week. I’m writing this post for absolute beginners and people who have heard of Bitcoin who don’t understand it and want to learn more.

Don’t want to read this post, listen to the podcast instead:

DISCLAIMER: I am not an expert when it comes to Bitcoin, cryptocurrency, finance, economics or investments. Everything I’m about to share is based on personal experience, what I’ve learned and my opinion (you’re welcome to disagree).

You can go back and listen to my conversation with Denym where we break this down quite a lot, but here’s my simple explanation:

Bitcoin is a digital currency, not controlled by any person or entity that allows you to transfer funds to anyone without an intermediary.

When you start to learn more about Bitcoin you’ll see confusing words get thrown around like blockchain, decentralisation, peer-to-peer, mining and so on… And this is why Bitcoin can be an intimidating topic for some people.

The key thing to remember is that Bitcoin is a currency not controlled by any person, central bank or country. If you stop and think you will quickly see what this is so revolutionary.

Since the invention of money, currencies have always been controlled by a central bank or the country within which it resides. For example, in the United States, the Federal Reserve (which is managed by a small group of people) controls monetary policy and supply. It’s basically the same in New Zealand, Australia, China, Canda, within the EU and so on. Each country decides how money should be controlled and supplied to the people.

Along comes Bitcoin which is a currency not controlled or owned by any one person or entity. The rules that govern Bitcoin are baked into the code and are controlled by mathematics. This means it isn’t susceptible to corruption or the greed of a small group of people who are acting in their own best interest. Rather than trusting a central bank and people to do the right thing with your currency, you are trusting computers and algorithms.

If you want to pay for something or transfer funds to someone, you can make this transaction without having to use an intermediary like a bank. Today, it can be very difficult to send money to other people or across borders. There are often huge fees to do so and banks have the power to stop you doing this if they really want.

Bitcoin, on the other hand, doesn’t go through an intermediary. It’s peer-to-peer meaning no middle man clipping the ticket.

Even if you have no interest in buying Bitcoin, I encourage you to do your own research and learn more as it’s a really interesting topic. There are some great books and documentaries online (listed below) that explain Bitcoin very well.

Since the inventoin of money, currencies have always been controlled by banks and people. Along comes Bitcoin which isn't controlled by anyone one person or entity. This is why it's so revolutionary.Click To Tweet

Why Bitcoin is so unique

Bitcoin is unique for many reasons. For this post, I’m going to focus on what I think is the most important reason; it has a fixed supply.

In the old days gold was used to buy things. We chose gold as it’s very rare, hard to find and everyone agreed on its value. The trouble is, it’s very difficult to hold and use gold. Imagine today if you wanted to buy a coffee, how do you shave off just the right amount from your gold bar to make the purchase?

To solve this issue, banknotes (i.e. paper money) was created to represent the gold in a bank. This is what it means when we say the currency was “backed by gold”. However, in early the 1970s, this all came to an end, currencies started to float (where the value goes up and down) and countries could start printing more money as needed to stimulate their economy.

As the supply of money goes up, the value of that currency goes down. This is economics 101; Basically, the more of a thing there is, the cheaper that thing becomes. So if you have $10,000 in your bank today and suddenly the supply of money is doubled, that $10,000 is now worth the equivalent of $5,000. That’s not good.

There is a fixed supply of Bitcoin just like there is only a certain amount of gold in the ground that can be found. There are currently just under 18 million Bitcoins in circulation. Think of that as gold that’s been found or “mined” out of the ground. Every day, computers that support the Bitcoin network find or “mine” new coins which enter the system for people to use. However, when the total Bitcoin supply reaches 21 million coins, that’s it. No more Bitcoin can be found or created. It’s similar to how one day we won’t be able to find or mine any more gold because we will have dug it all up.

And even as more Bitcoin is mined, the rate at which we can find new coins will decrease. This is what’s known as a halving. This is where the miners who process transactions on the network earn less for finding new coins. Again, imagine in the real world, as there’s less and less gold to mine, it becomes harder to find and extract the gold that’s left in the ground. It’s the same with Bitcoin.

If all of this is going over your head. The key thing to remembers is this. There is a fixed supply of Bitcoin. It cannot be copied to create more or counterfeit. Due to this fixed supply, as the demand and adoption of Bitcoin goes up, so does the price. This makes it unique from normal fiat currencies that generally go down in value. In fact, Bitcoin is so scarce that there isn’t enough Bitcoin for every millionaire in the US (let alone the rest of the world). That’s right. If every millionaire in the US wanted 1 Bitcoin, they wouldn’t all be able to buy one.

Bitcoin is so scare that if every millionaire in the US (let alone the world) wanted 1 Bitcoin, there wouldn't be enough!Click To Tweet

Why I’m buying Bitcoin every week

Every week I make small payments from my New Zealand bank account to buy a little bit of Bitcoin (you can even buy very small fractions of a coin if you want). The main reason I choose to do this is that I believe in the technology, the future potential of Bitcoin and I want it to succeed.

We’ve really just scratched the surface in this post. My goal with this post is to pique your interest so you can go and do more research of your own. There really is so much more to learn about this topic. As I’ve learned more, I’ve become more optimistic about the future of Bitcoin and it’s potential to do good in the world.

I believe Bitcoin will be one of the biggest advancements of our lifetime. I believe it will be as (if not more) revolutionary than the internet. Think back to the 90s when people were first learning about the internet. There were a lot of sceptics who thought the internet was a “fad” who couldn’t see its potential. That’s where we are with Bitcoin right now.

I choose to make small purchases every week rather than more sporadic bulk payments. This is known as “dollar-cost averaging”. Instead of watching the daily price and trying to decide if now’s a good time to buy, you make small payments more often and you get a range of good and bad prices over time.

And if you believe in the future of Bitcoin as I do, you’ll realise that right now, every day is a good day to buy. Even at it’s high of $19,000 back in 2017 it was a good time to buy. If Bitcoin were to ever reach just 10% of the value of gold, it would have to be worth hundreds of thousands of dollars per coin.

I choose to buy only what I can afford to lose. Even though Bitcoin is over 10 years old, it’s still early days and there’s a long way to go. I don’t think Bitcoin is going away but even if it did, I can live with the losses. By investing this way, it means there’s a small risk on the downside, (i.e. I lose an amount that I don’t mind losing) but huge potential gains on the upside if Bitcoin even reaches a small percentage of the value of gold.

If you want to learn more about Bitcoin, here are some recommended resources that I’ve personally used:

If you have any questions or feedback, I welcome your comments below!