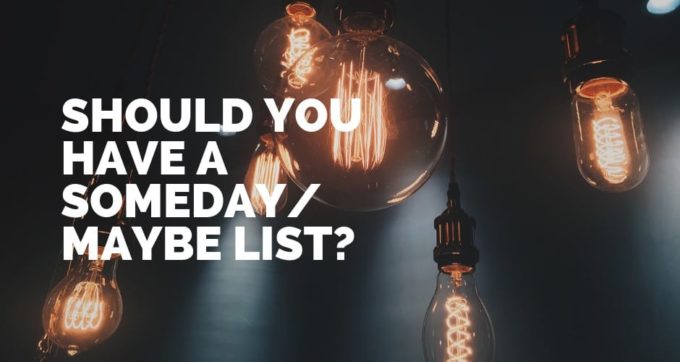 In last week’s blog post about self-doubt, one of the ideas I touched on was whether you should have a ‘Someday/Maybe’ list or not. To recap, in case you missed it, my argument is that:

When you adopt this mentality (turning “someday” into “today”), every decision you make comes down to a simple decision on “am I going to do this”, and “if so, when?”. There is no middle ground. In fact, I think having a “someday” list can be dangerous as it creates a distraction and makes you feel inadequate because you now have a list of all this stuff you haven’t done. I can’t tell you how often I work with clients who have task lists with hundreds of ideas and to-dos on them. All these things they’d like to do but aren’t important right now and you just end up overwhelmed and the self-doubt creeps in.

After talking about this, I shared the idea with my Private Slack group and received some really interesting responses:

The last point is really accurate. So often I too come up with ideas that I think are amazing. Then, after thinking about them for a while I realise they’re actually not as good as I first thought.

First, let’s step back a bit and identify the purpose of a ‘Someday/Maybe’ list.

As far as I can tell, the idea of a ‘Someday/Maybe’ list originates back to David Allen’s Getting Things Done method. To quote David Allen:

It can be useful and inspiring to maintain an ongoing list of things you might want to do at some point but not now. This is the “parking lot” for projects that would be impossible to move on at present but that you don’t want to forget about entirely. You’d like to be reminded of the possibility at regular intervals.”

This makes a lot of sense and in the past, I’ve tested different ways of maintaining a Someday/Maybe list. A typical ‘Someday/Maybe’ list will include things like ideas you’ve had but haven’t started, books you’d like to read or tasks/projects you’d like to start.

However, David Allen goes on to say:

“You must review this list periodically if you’re going to get the most value from it. I suggest you include a scan of the contents in your Weekly Review”

And this is where I see a lot of people tripping up (myself included).

This issue is that we don’t review our Someday/Maybe nearly often enough; as a result, the list gets ever longer and harder to manage.

Some of the benefits of a ‘Someday/Maybe’ list include:

I agree with all this logic. But lately, I’ve been thinking differently and have questioned the ‘Someday/Maybe’ list.

Here are some of the reasons why I think a ‘Someday/Maybe’ list isn’t such a good idea:

So, there are clearly some pros and cons to having a someday maybe list. So what should you do?

What should you do?

As I said in last week’s blog post, the first thing you need to ask yourself is “am I going to do this”, and “if so, when?”. This forces you to plan and take action rather than procrastinate on an idea.

If you are going to keep a ‘Someday/Maybe’ list, there are a few things you should do to make sure it’s maintained and put to good use:

If you follow the rules above, I think you can enjoy the benefits of a ‘Someday/Maybe’ list without letting it become a distraction or a chore to manage.

What do you think? Do you have a Someday/Maybe list? Let me know your thoughts or tactics in the comments below!