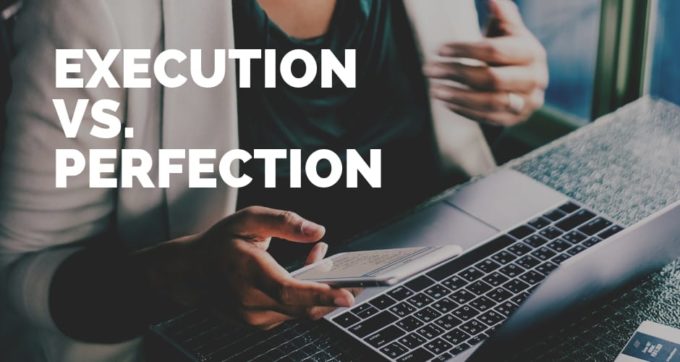 Execution vs. Perfection: Where are you on the spectrum? [PMP #127]

Home » Blog » Productivity » Execution vs. Perfection: Where are you on the spectrum? [PMP #127]

Recently, the members in my VIP Slack group and I were on a group call. We were talking about this idea of where you lie on the “execution «» perfectionism” spectrum. In other words, do you focus more on executing on ideas and getting work done or do you often get stuck in a state of paralysis due to a need to make everything perfect?

Don't want to read this post, listen to the podcast instead:

It’s an interesting idea because it doesn't matter which end of the spectrum you’re at, if you’re too far one way, it’s generally not good. You really want to try and find a sweet spot somewhere in the middle.

Are you a perfectionist? Or do you just want to get stuff done? Learn how to find a happy middle.Click To Tweet

First off, let me define the two ends of the spectrum:

At various times in the past, I’ve found myself at both ends of the spectrum. What I’ve found through my own experiences and by talking to members of my Slack group is that when you’re starting something new, we tend to be perfectionists. Fear and anxiety about this new thing slow us down and we use perfectionism as an excuse to procrastinate. For example, when I was first starting my website, I would waste huge amounts of time playing with button colours and fonts on my website. These things really had no impact but were a way I could procrastinate from doing the real work.

Later on, we end up the other way executing very quickly but often rushing. Now that I have an established business, I have loads of clients, projects and ideas I’m always working on. Now, I’m orientated too close to the “execution” side of the spectrum and sometimes rush an idea to get it done. Now I have to tell myself to slow down or spend a bit more time planning or working on an idea before I begin working on it.

Let me illustrate this further with an example.

On our group call, we were talking about making YouTube videos. Now I’ve made a tonne of videos about Asana and Pipedrive to market my business. My approach when making a video is to keep it simple. I usually hit record and talk on top of a screencast as if I’m talking to a client. No script, just a few bullet points for my notes. I don’t have an intro screen or anything like that. This way I can editing to a minimum making it a lot quicker and easier to produce new videos. Now, this is all well and good, but I’ve often looked back and though my videos lack a bit of polish compared to other YouTube videos.

On the other end of the spectrum, we have David. David is one of the members of my VIP community and has been talking about doing YouTube videos for a while. One of the things that’s held him back is concerns about quality. Often, when it’s your first time doing something like this, thoughts like “What if it’s not good enough” or “What if people don’t like me” get stuck in your head and lead to procrastination. My advice to David was to keep it simple, get the first video published and the rest will flow much easier after that.

My advice to you, dear reader, is to think about which end of the spectrum you favour.

Signs you are too much of a perfectionist:

If this sounds like you, you need to be more honest with yourself about what you really should be spending time on. You also need to get more comfortable with accepting “good enough” instead of chasing constant perfection.

Signs you might be focussing too much on execution:

If this sounds like you, trying slowing down. Use a to-do list or notebook to record ideas and plan out projects in detail before you start doing any work. Let everything stew a bit longer (this is what I’ve been doing). Take time to define what a successful outcome would look like for you.

Whichever end you tend to favour, recognise this and try to find a nice balance somewhere in the middle. This means you're working on the right things, doing them well (without going overboard) in an efficient and timely manner. That’s the sweet spot!