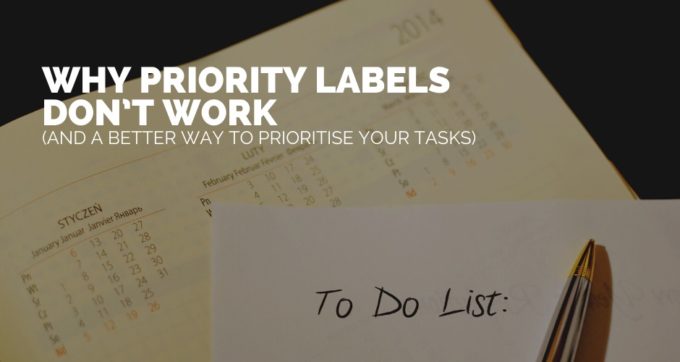 A lot of task management tools give you the option to assign a high, medium or low priority status to a task. Personally, I find this pointless and I’ve never liked assigning a priority to a task. And here’s why…

The problem with priorities

If you can define what constitutes a high priority task means to you, that’s a good start. But the truth is, most people don't do this. Most people use their judgement to decide what’s high vs. low priority and this is very subjective. We often label a new idea as high priority because it’s new and exciting and we’re motivated to get the work done now, so we label the task as high priority.

And if you work in a team, assigning priority is even harder. What’s high priority for you may be low priority to someone else. People don't usually think about what’s best for the team.

A previous client of mine who managed priority really well created very clear definitions for what constitutes a high priority task. She told her team:

“If we receive a customer support ticket that impacts the businesses cash flow, or if it’s related to a customers booking, then it’s high priority. Everything else is medium or low.”

This is an example of priority done well; where it’s clearly defined and communicated to the team.

Another issue that’s created when you use a high/medium/low priority system is that you only ever work on high or medium priority tasks. The low priority stuff never gets done. Obviously, you cared enough to put the task on your to-do list but because it’s lower priority than the other stuff, it never gets accomplished.

How else should you prioritise your work?

As you can see, I’m not a big fan of using a high/medium/low priority system. This doesn't mean I don’t prioritise my work. I just think there’s a better way.

When I identify a new task that needs to be completed, rather than assigning a priority label, I assign a due date. In fact, every task in my Asana account has a due date on it. Not all of these are what I would call a “strict deadline” i.e. something that has to be done by a specific date. Most of them are what I consider to be “flexible deadlines”. i.e. tasks that I’d like to do before a certain date, but if I don’t and I have to change the due date later, that’s fine.

By assigning a due date to a task, you are still prioritising the work. But instead of using a subject high/medium/low label, you’re using the date to create a sense of urgency. High priority work can be assigned for today or this week and medium or low priority tasks can be budgeted for later. And if you can block out time on your calendar for this work, you can even budget how long you need to do the work and plan exactly when you’re going to work on each task.

So, why is this better?

How do you decide what the due date should be?

When you add a new task to your to-do list, you can ask yourself a few questions to determine what the due date should be?

The golden rule is this » Don’t create a task without assigning some kind of due date.

Doing this means every task is treated equally and appears at the top of your to-do list eventually. This doesn't mean you’ll necessarily do the work, but it does mean the task gets re-evaluated instead of being forgotten about.

What if your priorities change?

When prioritising your work using due dates, it’s easy to make changes to your plan if needed.

Let’s say you had a plan to do ‘ABC task’ today but an urgent issue has come up which you need to prioritise. You can simply update the due date on ‘ABC task’ and bump it to tomorrow or later in the week when there’s time (again, doing this on your calendar using my time blocking method makes this really quick and easy to do).

I do this all the time. As I said, because everything has a due date, sometimes I look at my to-do list and I see some lower priority tasks that are due today but I have other important work to get done. I can simply re-schedule these tasks for later, or if I’ve bumped the task a few times and no longer feel it’s important or worth doing, I can remove it from my task list completely. This means your to-do list gets pruned over time instead of a load of low priority stuff collecting at the bottom of your list.

Writing this post, I’m well aware that a lot of tools have a high/medium/low priority system and it’s almost an expected feature within a task management system. And like I said, this can work if you define your priorities well.

But in my experience, using due dates to define priority is a very effective way to work and is less subjective.

If you have any questions or feedback, please leave me a comment below!