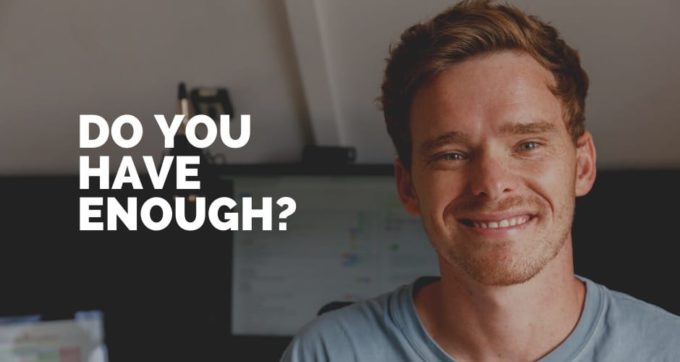 For most of our professional careers, we are pushing to achieve, do and earn more. Constant growth. That’s the goal.

The problem here is that we become insatiable. We’re never satisfied and constantly have to move the goalposts to achieve more. If you’ve ever received a pay rise or promotion, you’ll know what I mean. You think that earning that little bit extra or having that new responsibility will make all the difference, but it usually doesn’t. It quickly becomes your new normal and you need more…

Having ‘enough’ is an idea that challenges you to only earn, do or have enough instead of chasing the constant pursuit of more. This goes against our natural instincts and may be uncomfortable for some to hear.

And this is an idea that you may not be ready to hear. If you’re early in your career this message probably isn’t for you. There are always going to be times when you need to be hungry and chase more. But at some point, this has to stop.

Do you have 'enough'? Or are you constantly pursuing MORE?Click To Tweet

This idea has come up a few times in my life over the last few years:

Firstly, when Paul Jarvis wrote about how he considers anything above a little bit of success to be a bonus (or what Paul refers to as ‘gravy’). This went on to become one of Paul’s most popular blog posts and lead him to write the book Company of One. Paul’s ideas really had a profound impact on my own view of growth. Paul helped me to realise that you don't need to have a big business. That having enough money to support yourself, your family and lifestyle is a perfectly acceptable goal.

Secondly, Ryan Holiday’s writing has had a big impact on my views on personal development and growth over the last few years. Ryan is one of my favourite writers. His books, The Obstacle is The Way, Ego Is the Enemy and Stillness Is the Key introduced me to the world of Stoic Philosophy which, as someone who is not religious, has given me a greater feeling of guidance. Ryan wrote an article earlier this year about what it feels like to get everything you ever wanted. In the article, Ryan discusses how getting what you want can often feel empty as you’re not sure what to do next.

This is something I’ve been wrestling with recently…

A few weeks ago, some friends of mine (who also run businesses) and I took a trip down to Lake Taupo for a work retreat. During the trip we ran hot seat sessions where the person in the seat could bring up a challenge or question for the group to help troubleshoot. But I really didn’t know what to discuss for my hot seat. So when my turn came around, here’s what I said (paraphrased):

“For years my goal was simply to work for myself. To earn a good living on my terms where I can support my family and live a comfortable life. And I feel I’ve achieved this. But now I don’t know what to do next. I don’t want to hire lots of staff or grow a big company. So what do I do now?”

Now some people may be reading this and rolling their eyes. “Oh, how hard it must be to get what you want and not know what to do next”. But as mentioned, my goals are more modest than most. A lot of people want to have big successful businesses then sell out and make millions of dollars. I don't want any of this.

After the hot seat, my key takeaways were as follows:

And I’m not alone in these views…

Last week, I was sharing this with another friend of mine who’s in a similar position. Like myself, he’s worked hard during his professional career and now feels like he’s earning enough and wants to put his time into other things or simply say no to projects he doesn't want to work on. But he feels like society almost expects him to do more. Isn’t the whole point of capitalism to maximise profits?

Kia, a customer of mine loves to remind the other members of my VIP community that each month he makes enough to live off then stops working so he can hang out with his dog. If you want to hear more, I talk about this with Kia in episode 140 of the podcast.

I guess I’d like to end by asking you, dear reader, to think about this idea. What does enough mean to you? Maybe right now you’re starting your business or trying to reach your income target. In which case, go for it! You have my support. At the same time think about what enough means to you. What’s the number? When will you be able to change your goals from income generation to lifestyle optimisation? Think about it.