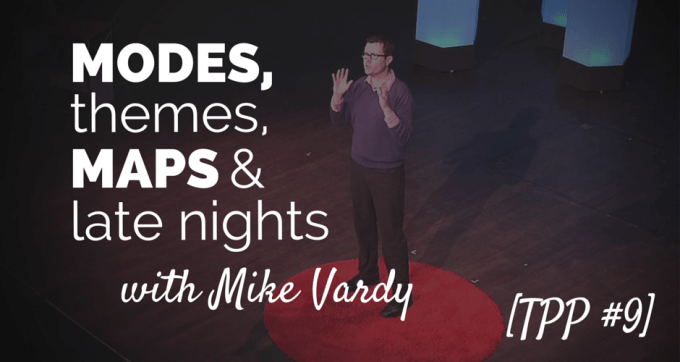 Welcome to Productive People, my blog and podcast series dedicated to learning from productive people who are smashing their goals and getting stuff done.

In this episode of the Productivity Podcast I interview Mike Vardy from the Productivityist. Mike is a productivity enthusiast and specialist with a wealth of knowledge whom I have personally learned a lot from. Mike has been working in the productivity space for over a decade and has been featured on The Huffington Post, Lifehacker, 99u among other places. Before founding Productivityist, he served as Managing Editor of the popular productivity blog Lifehack, and as an editor at The Next Web and WorkAwesome.

It was a real pleasure to have Mike on the show and he continues to teach me a lot about how to be more productive. Listen to our chat below (I'll definitely be listening to this again and again to soak up every piece of advice).

BONUS: Head on over to productivityist.com/paul where you can get a copy of Mike's Weekly Theming Guide and the Way of the Productivityist Manifesto!

Make sure you head on over to iTunes and subscribe to the podcast. You can also subscribe via the RSS feed. Are you enjoying The Productivity Podcast? I'd love to hear from you in the comments below with your thoughts and ideas of things you'd like to hear more about! 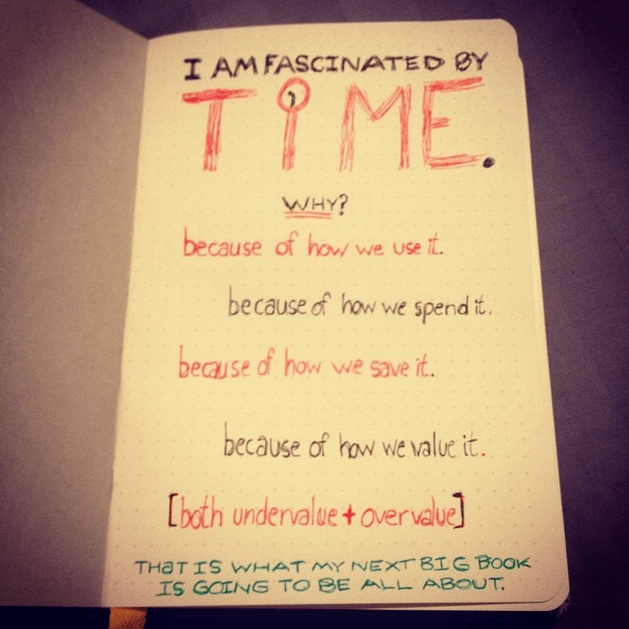 Mike is a productivity strategist and recently released his own productivity approach called the NOW Year Formula. Even though productivity is somewhat of a dry topic for people, Mike aims to make it a more exciting topic and wants to put the “personal” back into personal productivity. By being more productive Mike lives a very comfortable and fulfilling life and his goal is to help as many people as he can to achieve the same thing. It's important to take the time to watch your favourite TV shows and have fun with friends. Mike's encourages people to be more productive so that you can enjoy these things without feeling guilty about not getting stuff done.

Often people think that by being too structured you can make life boring but in fact the opposite is true. Structure actually creates freedom and people like Natalie Sisson are able to travel the world while running a business because of the structures they've set up. 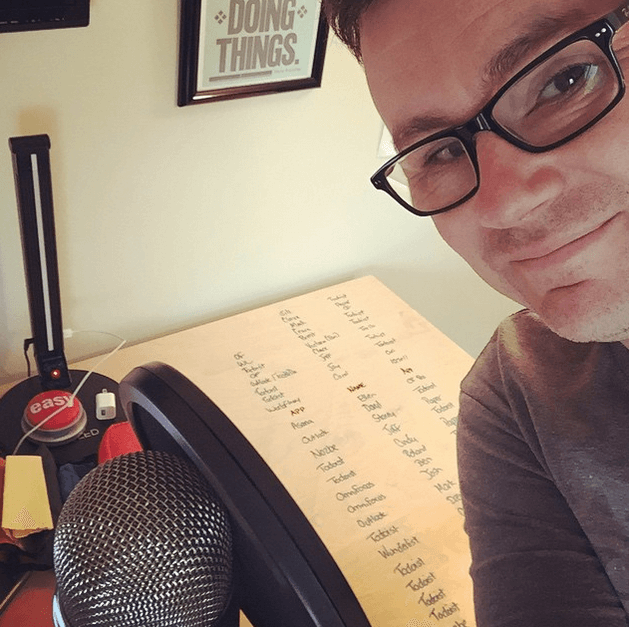 On a day to day basis, most people work by project. This means is you end up bouncing between email, task management apps, your phone, various people, writing apps and lots of different spaces all at once. Your work gets very chaotic and you incur switching costs as you move between these spaces. Instead of working by project, it's far better to work in modes.

A mode is basically a mindset or a state that you're in. If you follow the Getting Things Done (GTD) methodology you'll be familiar with the idea of contexts. Modes are similar but they refer to your state of mind and not just the tool you're using or your current location.

Imagine you go grocery shopping. It's pretty likely that you're going to enter the supermarket with a meal plan of the food you're going to need for the upcoming week. But, do you go shopping by day and buy all the ingredients for each day as you navigate the supermarket? Probably not. It's more likely that you'll start in the fruit and vegetable section and you'll grab all the fruits and veggies you need for each meal while you're there. This is mode-based work.

When creating new tasks on your to do list, you can label them with a mode. A really important mode to establish is “low energy mode”. This is the state you're in when you don't feel like doing a lot. For Mike this could be something like posting a social media update. Then we have “high energy mode”. When you have more energy you can tackle the boring and more mentally challenging work as you'll have more energy to get through them. For example, keeping within the context of writing, a high energy task for Mike could be writing some of his book. Instead of watching the clock on the wall you watch your own body clock to decide what to do based on how you feel. There's no point trying to write a book if you don't have the energy.

Another great mode to use are time based modes. This is where you label tasks with a block of time, for example; 5 minutes, 25 minutes of 60 minutes. You can then pick which tasks to work on based on how much time you have. For example, if you have an hour between meetings you could work on a couple of 25 minute tasks, or see how many 5 minute tasks you can get done in that time.

You can schedule time for specific modes and or randomly go into them throughout the day. For example you can schedule email and high energy modes in the morning. Then later on between meetings you might go into 5 or 25 minute mode to use the time effectively.

Themes are the larger areas of your life that you choose to focus on; you can theme your days, weeks or even months. For example, Monday could be “administration day”. So you can wake up not necessarily knowing what you're going to do, but you know that in general you're going to do some admin work. When theming your days, don't skip a day; even on the weekend, you can theme Saturday and Sunday as free days.

It's important to theme your days around your life and based on what's going to work with your routine. For example, Mike has Tuesday's and Fridays as “media” days because no one else is home meaning he can record video and podcast content without being disturbed. Because Mike's wife and son are home on Thursday this becomes a writing day.

But! Just because Tuesday is a media day, it doesn't mean you can't write or do some admin work on this day as well. As Mike puts it: if you think about The Empire Strikes Back (the Start Wars movie), there is a love story in the movie, but the entire movie would be classified as a science fiction movie, not a romance movie. The same is true of themed days. You may be working on media, but sub-plots from other themes may creep in as well, and that's okay.

Where themes are useful is when you get taken off the rails or you don't know what to work on next. You can think about what theme you should be focusing on and decide what to do next.

The Daily MAPS and recommended tools (36:35) 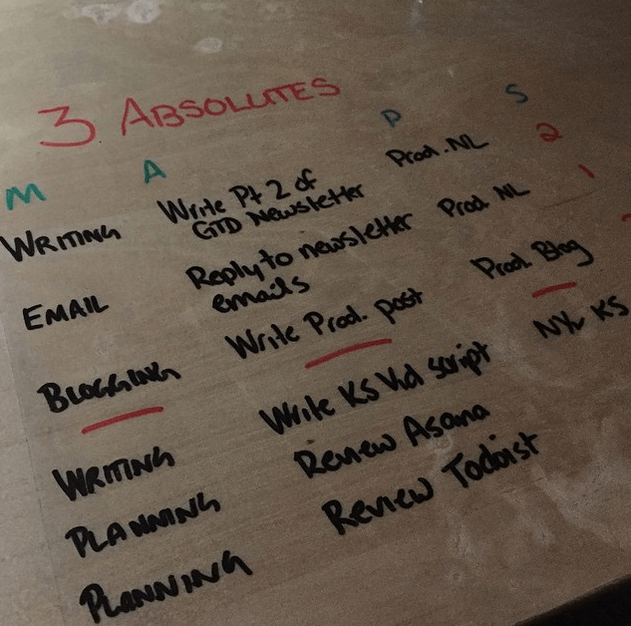 When creating your productivity system, the first thing you need is a way of capturing things and getting it out of your head. This could be something as simple as a notebook where you write down the stuff you're working on.

Mike uses his own system called the daily MAPS to organise his work. In the app of your choice you use the following to organise your work:

You can apply the above system and use it within dozens of different apps (and Mike has tried most of them). Tools like Asana, ToDoist, Omnifocus, Trello, Outlook or even a spreadsheet are great for using with the daily MAPS.

Apps like Drafts and Evernote are great for storing reference material, writing and for digitally capturing information and ideas.

In terms of email clients it's good to pick one that allows you to get your emails into your task management app or Evernote nice and quickly. You can use apps like Airmail, Postbox on the computer and Dispatch or Cloudmagic when you're on the go.

Mike now uses Sunrise Calendar as his calendar app. The new Meet feature is super handy for quickly scheduling meetings with friends or for work.

Even though there are so many tools out there, don't worry about switching between apps to try all of them. The battle shouldn't be with the app, it should be with the approach that you're using and making sure you stick with it. Find an app that works for you and stick with it.

There's an ongoing debate between night owls and early risers as to what is more productive; working late at night or getting up early. The main lesson here is to not fight your body clock and just do what feels natural to you and don't worry about what others are saying (even me).

There is actually evidence to suggest that some people are more wired to work late at night whereas others are programmed to work better in the morning. It comes down to genetics. This is why fighting your body clock is such a bad idea.

Research shows that cortisol, your bodies stress hormone, is highest in the morning. So if you get up later, you wake up feeling less stressed as your body has already burned some of the cortisol in your system. This is a pretty small point and more research does need to be done here, but it's an interesting idea.

Evening routines are a crucial part of your day. How you end your day will determine how well you perform the following day. You need to end your day by identifying the things you want to work on the following day and doing this in the afternoon or evening is perfect as you have a clear idea of what you've recently achieved and what needs to be done next.

Finally, stagger your tasks in a way that make sense with your body clock. So if you have low energy in the morning, work on the higher impact stuff later on when you've woken up. Vice versa if you're a morning person. 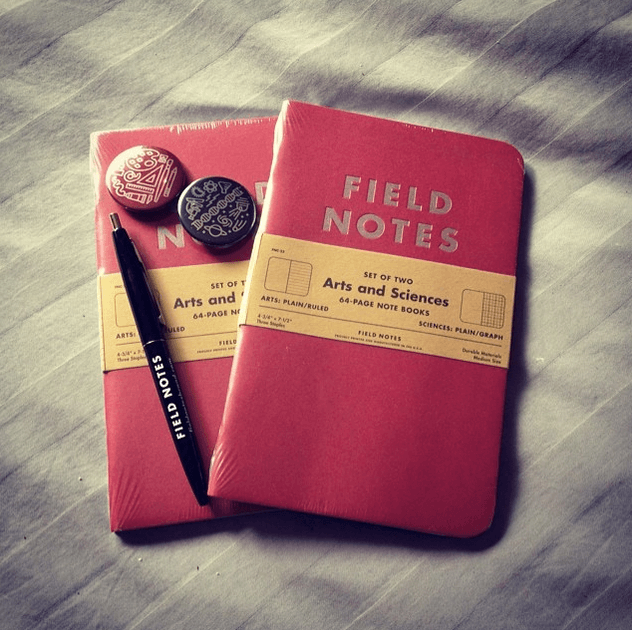 Mike uses the Day One app to journal and document his progress each day. An entry will include bother personal and work related things and allows Mike to summarise what he's achieved and what's next. Mike then does a rapid review process twice a month and during this process the first thing he'll do is go back over his previous journal entries to pull out his main achievements from the last 14 days.

The journaling process is great for emptying your head late at night. It's also super handy for working out what needs to happen next.

Don't worry about writing really well. A journal entry could be as simple as: “Had writers block, couldn't finish my blog post”.

At the end of every quarter Mike reads the entire journal for the year and then at the end of the year Mike will read the whole thing again. Doing this paints a really nice picture of what you achieved that you're proud of, where you got stuck and what you need to improve on in the following year.

Other apps to check out for journaling are the Five Minute Journal which you fill out in the morning and evening. Or you could just use Evernote with a separate notebook and tags to keep your journal entries organised.

Head on over to productivityist.com/paul where you can get a copy of Mike's Weekly Theming Guide and the Way of the Productivityist Manifesto. Be sure to follow Mike on Twitter as well!