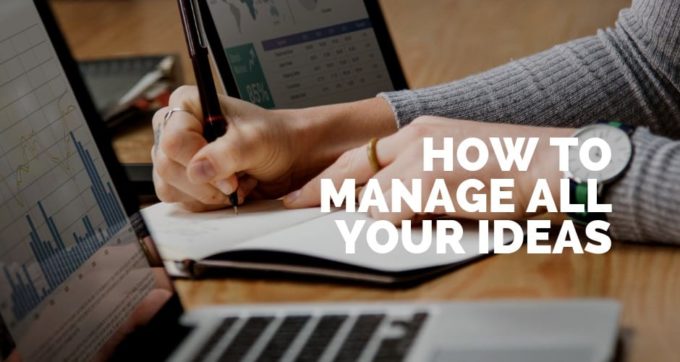 Do you ever feel overwhelmed by ideas? I do. Most of us have lists of ideas in a note somewhere, but very rarely do we act on them. Ideas hit us all the time and usually sound great at the time. The trouble with all these ideas is in working out which ones are good and should be prioritised first, and which ones are bad and shouldn’t be worked on at all.

The excitement about a new idea can cause is to spend time on things that we later realise shouldn’t have been done in the first place.

Or, the overwhelm caused by having too many ideas can result in decision fatigue and not doing anything at all.

By taking a few simple steps, you can more effectively prioritise your time and plan how and when to work on all your ideas.

Don't want to read this post, listen to the podcast instead:

1. Does this idea deserve my time?

The first thing you need to do whenever you have an idea is to decide whether the idea is worth acting on in the first place. To make this decision easier, the best thing to do is to wait. Let some time pass by and see if you still like the idea a week from now.

A few weeks ago I had an idea to create a series of YouTube videos about a new sales CRM tool. At the time, I thought this was a great idea and would be well worth sinking a few weeks of my time into. Following the above rule, I wrote down all my thoughts about this idea into Asana and forgot about it for a few days. When I returned to the idea, I realised it wasn’t nearly as good as I remembered. I realised it would be more work than I had anticipated and my time would be better spent on other things.

Remember that the excitement about a new idea can cause us to make irrational decisions. That’s why waiting a few days is so powerful. It means you can revisit the idea with less of emotional bias and review it more objectively.

And even if you revisit an idea and still feel good about it, remember that there’s always an opportunity cost. By saying ‘yes’ to one idea, you have to say ‘no’ to others.

How to manage ideas: The excitement about a new idea can cause is to spend time on things that we later realise shouldn’t have been done in the first place.Click To Tweet

2. Where to put all your ideas

While we were away travelling over the last few months, I had loads of ideas of things I’d like to do to my website, products and content. But because we were travelling, I didn’t really have time to work on any of the ideas. I needed a way to keep these ideas organised so I could come back to them at the right time.

A few months ago, I wrote about whether you should have a ‘Someday/Maybe’ list. The key takeaway from this post is to limit your ideas to a maximum of 10-15 things. This way, if you want to add something to the list, you have to make trade-offs and remove something else first.

By maintaining a minimal ’Someday/Maybe’ list, you’re less likely to feel overwhelmed and guilty by an ever-growing list of things to do. It helps to eliminate the decision fatigue that results in no action at all.

I keep my own list of ‘Someday/Maybe’ items in Asana using a tag. 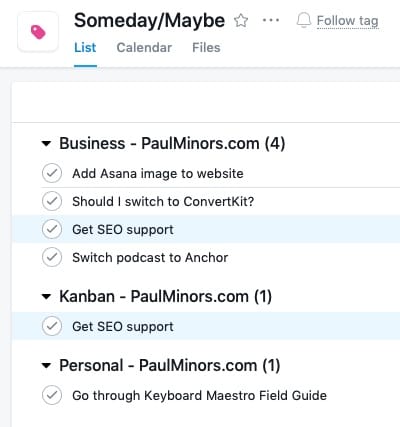 How to manage ideas: The overwhelm caused by having too many ideas can result in decision fatigue and not doing anything at all.Click To Tweet

3. Decide what to do first

Upon returning from our trip, I went through all my ideas in Asana and worked out:

By answering all these questions, you can determine the order in which these ideas should be acted on. Again, I find it really useful to do this in Asana where I can create a timeline showing the order in which I should tackle things.

Most people have a list of ideas and pick the one that looks easy or exciting. By going through the steps above you can prioritise your ideas into the right sequence.

4. Block out time to work on your ideas

The final step, once you’ve determined the order in which to work on your ideas is to block out time to work on them. “Time blocking” is something I’ve discussed many times on the blog and podcast.

Time blocking is particularly useful when it comes to working on your ideas as it forces you to think about the amount of time you need to do the work and when you’re going to spend time on it.

The above process is something you can be doing all the time. When you have an idea, jot it down and leave it. Then once a week, perhaps during a weekly review, you can review your ideas, determine the sequence and start time blocking on your calendar.