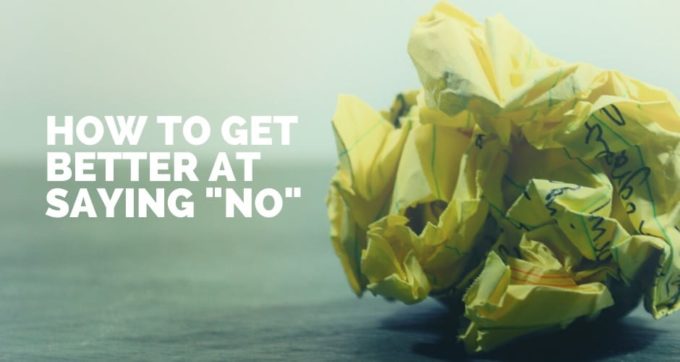 If you’ve done any kind of reading or research into productivity, you’ve probably heard many times about the importance of saying no.

Don’t want to read this post, listen to the podcast instead:

This episode of the Paul Minors Podcast is sponsored by TextExpander.

Saying “no” to ideas, requests from colleagues and exciting opportunities can be really hard. As social animals, we’re conditioned to want to please others, so we say “yes” to every little idea and request we’re presented with. This results in us being over-committed to too many things that we really don’t want to do.

How many times have you said “yes” to something only to regret it later?

I’ve mentioned this before but definitely check our Derek Sivers’ blog post and his interview with Tim Ferriss on the subject (skip to 57:06). Both of these resources helped me a lot.

Here are my 5 tips around how to get better at saying “no”:

1. Get clear on your goals

Knowing what to say “no” to is really hard if you have no focus or direction. We say “yes” because we think the thing we’re saying yes to will be a good use of our time. But really, we have no idea.

Books like Essentialism and The ONE Thing are great sources you can check out that will help you to identify what is truly important so you can say “no” to everything else. Gary Kellar, the author of The ONE Thing, describes one’s inability to say “no” as one of his “4 thieves” i.e. things that prevent you from achieving your goals.

Getting clear on your goals is step #1 because, without goals, you have no conditions by which to make decisions. If you work for yourself, you’ll need to think about where you want your business to be in the next few years. And if you work for an employer, asking them what they want you to spend time on will really help you down the line if you ever receive funny requests.

With your goals established, you can then set up some rules of things you’re going to say no to. These should be things that clearly have no impact on your goals:

For example, with me:

Write these down in a notebook or your app of choice if it helps. Having a note you can update over time will really help you to develop your “no” muscles.

3. Give yourself permission to say “no”

As I said at the start, we are biologically conditioned to want to please others and saying “no” goes against our natural instincts. Give yourself permission to say “no”. You need to be comfortable with the fact that by saying “no”, you are going to disappoint people.

Even if your employer asks you to do something, you should at least question their request if the thing they’re asking isn’t a good use of your time or doesn’t align with the goals they’ve given you.

The way I justify it to myself is that by saying “no”, I’m able to create a better result for everyone. For example, if I say “yes” to your thing, I have to say “no” to my things. I’ll probably do your thing with some resentment which isn’t good for anyone. So wouldn’t it be better to not waste any time, disappoint you a little bit and do the thing that I know to be a better use of my time.

4. The more in demand you are, the more you need to say “no”

I’ve found this to be the truest when working for yourself but also when I’ve worked for other people as well. We generally say “yes” more in the early days of a new job or business. And this is a good thing. You need some “yes” experiences to help figure things out. Then as you get more well-known or demand from colleagues grows, your requirement to say “no” will increase.

This might mean you have to pass on some genuinely good opportunities. But that’s okay. Often the really good stuff will come up again later, giving you a second chance to reconsider. But generally, these good ideas are the sacrifice you’re making so you can stay focused on your essential goals.

Saying “no” can be tricky. But with practice and experience, it gets easier.

As I mentioned before, I now say “no” to most joint venture opportunities. I’ve only learned to do this after trying a few. It was only after getting some experience did I learn that these JV’s are generally a waste of time.

The more client’s I’ve worked with, the more I've learned about what kinds of people to say no to, for example:

What have you done to get better at saying “no”? Why do you struggle with saying “no”? Leave me a comment below!

#Consulting #Focus #How To #Prioritisation