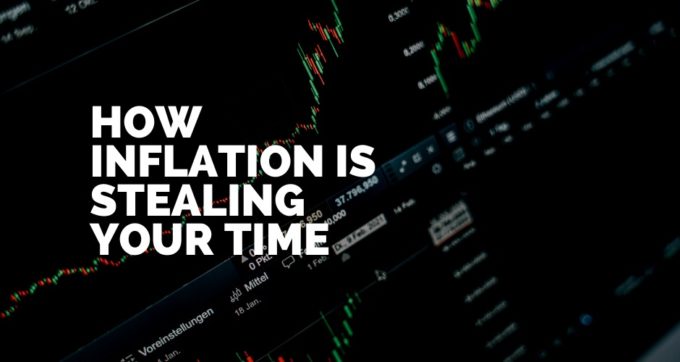 How inflation is stealing your time [PMP #252]

Inflation is the hot topic everyone is talking about right now. COVID and even the Russia-Ukraine war have taken a back seat as people all around the world struggle to adjust to the rising cost of living.

On this blog, I’ve often discussed how I try to optimise both my time and income. Earning more is great but not if it’s disproportionate to the time required to earn the income. In this post, I want to unpack how inflation is stealing your time away from you and what you should be doing to try and mitigate it.

When you trade your finite time for money, it makes sense to hold it in an asset that has a finite supply and can’t be inflated.Click To Tweet

Let’s start with a quick recap of what inflation actually is and what causes it. According to Investopedia:

‘Inflation is the decline of purchasing power of a given currency over time. A quantitative estimate of the rate at which the decline in purchasing power occurs can be reflected in the increase of an average price level of a basket of selected goods and services in an economy over some period of time. The rise in the general level of prices, often expressed as a percentage, means that a unit of currency effectively buys less than it did in prior periods.”

Although I prefer the much simpler definition by Nobel Prize winner Milton Friedman:

“Inflation is caused by too much money chasing too few goods”

There are a number of factors contributing to inflation at the moment:

The supply of money » After COVID hit, governments and central banks around the world increased the supply of money to help stimulate the economy to get everyone through the pandemic. Here’s the transcript of an interview with CBS News where Fed Chair Jerome Powell discusses how the market has been “flooded with money”. I’m not going to get into whether this was justified or not (that’s a different discussion). But if you flood the market with money, it will result in the “too much money” part of the inflation equation (“too much money chasing too few goods”) getting blown out of proportion compared to the number of goods.

Think about it this way… If everyone on planet earth was given a billion dollars today. Would we all be rich? No. Because we’d all go out and try to buy houses, and cars and go on holidays and there wouldn’t be enough supply, therefore prices would increase to restore the balance between supply and demand.

Supply chain issues » COVID and now the war between Russia and Ukraine has resulted in ongoing supply chain issues which are still sorting themselves out. When ports in China were shut down in early 2020 (and again recently), “too few goods” were available to purchase. And that’s if you can even get your products onto a cargo ship. A report by the IMF released in March 2022 shows that the cost of shipping containers has risen 500% compared to pre-pandemic levels, adding to the cost of production.

Russia-Ukraine War » Russia is a big supplier of energy in the form of natural gas to the rest of Europe and especially Germany. Ukraine and Russia are both big suppliers of wheat and grain which are used in many types of food. The war and economic sanctions have resulted in these two commodities sky-rocketing in price causing a knock-on effect downstream in supply chains. When the cost of energy goes up, so does everything else as manufacturing and transport require energy and so this is passed on to consumers.

In summary, we’ve witnessed the supply of money increasing i.e. “too much money”. And we’ve also seen supply chains and the war result in fewer goods reaching the market i.e. “too few goods”. This results in a perfect storm of inflation.

How inflation steals your time

When prices go up, this has the effect of decreasing your purchasing power. Put simply, $100 today will buy fewer goods and services compared to what you could get a year ago.

So if last year you earned $100,000 and you haven’t had a pay rise, then you are essentially earning less this year. The dollar figure hasn’t changed but as prices have gone up and your purchasing power has gone down, then this is essentially a pay decrease.

But what has this got to do with time?

Of the $100,000 that you earned, let’s say you save $10,000 by putting it in the bank where it’s nice and safe. In the US, inflation was recently reported as 8.3% and if we use the rule of 72, that means at the current rate of inflation, your $10,000 of savings would lose half its purchasing power in 8.7 years. Of course, that’s only if we observe the same rate of inflation the entire time, which is unlikely, but hopefully, you appreciate how damaging that is.

In short, after trading your time for money, the $10,000 worth of time that you saved will lose half its purchasing power in 8.7 years. The time you used to earn the $10,000 is essentially being stolen from you as prices continue to increase.

How to mitigate inflation

Time is the most important and scarce asset we have. Time is finite and we can’t create any more. And when you convert your time into money, what you really want to do is save that money so that it doesn’t lose purchasing power over time. If the savings you get at the bank or the return you get on an investment is less than inflation, you’ve essentially converted your time into a melting ice cube.

I’m not going to give out investment advice but if you have savings, this is what I’d be thinking about; how to save or invest your wealth so that it generates a greater return than the rate of inflation. Leaving money in the bank doesn't work anymore. As the supply of money has increased (remember “too much money chasing too few goods”) this results in that currency losing value. Now of course you need some cash on hand to pay your bills and you don’t want all your money tied up in assets that may or may not appreciate (especially in the current market).

One of the reasons I like Bitcoin is that it has a finite supply. So when you trade your finite time for money, it makes sense to hold it in an asset that has a finite supply and can’t be inflated. Gold is another good option which has historically performed well when markets panic as the supply of new gold entering the market is typically very low.

Stocks, bonds, Bitcoin, commodities, everything is going down in price right now so it is really hard to invest. But it won’t be this way forever and the best time to invest is when the market is down and people are panicking. So get ready. Start thinking about your next moves now so you can be ready to act when the market does turn around.