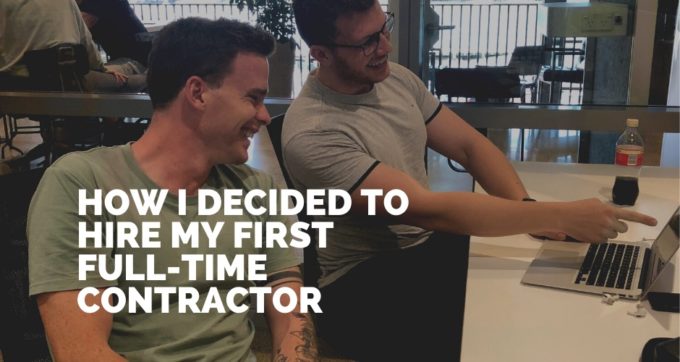 On my recent episode of Minor Updates, I shared that I’ve now hired my friend Warwick as a full-time contractor within my business. I’ve been working as a solo operator since I started my business in 2015 so this is a pretty significant change to how I work. Many of the people who follow my work are freelancers or consultants, like me. So I decided to share how I went about making this decision in case you’ve ever considered doing something similar.

Paul Minors · PMP #209: How I decided to hire my first full-time contractor

How this all started

Working with Warwick came about in September 2020 after he’d recently separated from his ex-partner and was looking for some work. I knew that Warwick had some experience using Zapier in his previous business so we had a chat to see if he’d be willing to work with me to help with some of the Zapier work that I do for clients.

We started by both writing into a shared Apple Note about what we each wanted to get out of this experiment. Warwick was looking to earn a bit of an income and I saw it as a good opportunity to work a contractor on a trial basis. Working in person was also an attractive opportunity as it meant I could work closely with Warwick to train him up and manage his work.

And so it began. Warwick was looking for about 10 hours a week which I wasn’t sure I could offer at first. But as he became more capable with Zapier I delegated more and more work.

Over the course of this experiment I realised a few things:

As someone who loves numbers and tracking things, I asked Warwick to track his time and cost on each job so I could measure the profitability of each project he worked on. This meant I was able to clearly see the impact he was having. I was still managing sales but for the actual project work, he was doing all (or a lot of) the work, saving me time and I was able to still make a profit that was worth it for me.

Early on I realised that sacrificing a bit of profit was worth it if I was saving time. Not only did it make life a little easier, but it meant our capacity as a business had increased. Now we could handle more work together than I could on my own.

Transitioning to a full-time contract

In early 2021 Warwick mentioned that he would be applying for a few jobs as he was looking for something a bit more permanent. My first instinct was to find someone to replace him. Now that I’d had a taste of the positive impact working with a contractor could be, I knew I’d need to find someone to fill his shoes.

I then asked Warwick – “What would it take for me to keep you on?” and we had a very open conversation about how a permanent role could work. He was enjoying the work and really just needed more security which is why he’d been looking for a job where he would get a consistent salary.

So we each went away again to think again about what we would each want to get out of a permanent position. As well as the security, Warwick really wanted to own and grow the automation side of my business and that was fine with me. The way I saw it, if he could take on all the automation work for me so I could focus on other parts of the business that only I can do, that would be great. For me, I was happy to pay more to keep Warwick involved especially if he was going to help to grow revenue. This would take Warwick from being an expense on the business to actually becoming an asset that produced a positive financial return.

So from there it really came down to the numbers and I had to decide how much could I afford to pay Warwick over the course of the year and what payment options could we put in place to compensate Warwick for adding value to the business.

Whenever I’ve had to make a big decision in my business; when quitting my job, when Hayley quit her job to join me or now when hiring someone full-time, I’ve always relied on the numbers to make a decision.

The way I looked at the situation is that simply paying Warwick an hourly rate to help with my client work was an expense worth paying if it meant I could save time and if it made my life easier. But bringing him into a more permanent role meant there was an opportunity for him to not just himself as a cost but also add more value to the business.

I spoke to a few people and worked out a starting salary for the year that I could afford to pay. I then listed the additional costs that hiring Warwick would incur e.g. software tools and his permanent desk at our co-working space. This gave me the total cost of hiring Warwick for the year.

I divided this number by 12 to work out the monthly cost and this became my break-even point. Hypothetically, let’s say this is $7,500 per month. This meant that Warwick would need to generate $7,500 in revenue per month to simply break-even on him as an expense. Even if he didn’t break even each month, again, it’s still worth having him around if he frees up my time.

But the goal was for Warwick to not be an expense but an asset. So I came up with a bonus structure where I would pay a base salary each month and Warwick would be responsible for selling and managing certain clients. The first $7,500 each month he wouldn’t receive a commission on, but after he breaks even he’ll earn a percentage of every sale as he is credited for the additional income he has generated for the business.

This works out as a win-win for each of us. Warwick receives a guaranteed income each week but is rewarded with a bonus as his contribution to revenue increases. For me, I get a certain amount of non-commissionable work each month as Warwick is paying his way, but as he generates more revenue for the business, he can share in the upside.

The only downside I can see with this situation is that I am sacrificing a bit of flexibility. Until now, I’ve always had the option to stop my business and work on something else if I ever wanted to and I’ve only ever had myself to worry about.

Now that I’ve committed to providing Warwick with work for the year, I feel like I’ve given up a bit of this freedom. I’ve rationalised this by reminding myself that I don’t intend to drastically change my business for the foreseeable future and if anything, I’ve been pushing Warwick to take on more and more responsibilities.

It’s also exciting to think about how Warwick could help to grow the business and who knows, if it makes sense, maybe we’ll hire more people in the future. This is something I’ve always been against, but working with Warwick and going through this process has helped me realise that if done right, I can grow without detracting from my lifestyle.