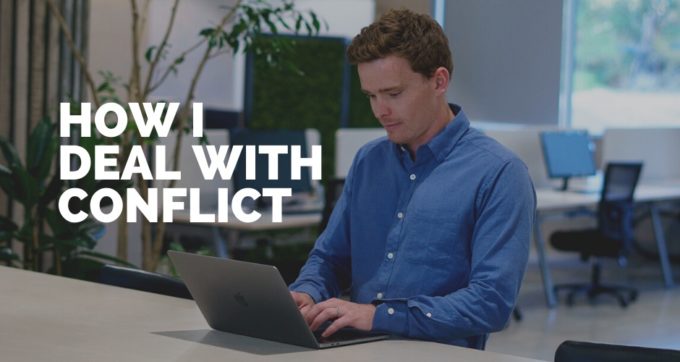 Conflict is something we all have to deal with. We can do our absolute best to try and avoid conflict but like death and taxes, it is inevitable.

I view any kind of conflict as a massive waste of time; time you could be spending on more productive, not to mention, more enjoyable things.

Conflict is also a source of easily avoidable stress. Even after the conflict has been resolved, the tension hangs around and we feel peeved off for the rest of the day.

Given that conflict wastes our time and causes stress, my goal is to avoid conflict as much as possible. And when it can’t be avoided, my goal is to move on and find a resolution as soon as I can. Here are my thoughts on how best to do that…

As already mentioned, our first priority should be to avoid conflict wherever possible. As long as your views or actions aren’t going to affect me, why bother getting involved?

Now I’m not saying I don’t debate or question anyone that has a different opinion to me. I’m all for a healthy discussion. I am strictly talking about avoiding conflict; a disagreement or argument that’s fuelled by emotion (not logic) often where parties are assigning blame to one another.

I don't know who originally said it (it may have been Keanu Reeves), but I’m a big fan of the quote:

“I’m at the stage of my life where I keep myself out of arguments. Even if you tell me 1+1=5 you’re absolutely correct, enjoy!”Click To Tweet

A few weeks ago while in lockdown, I was playing with our 3-year-old at the park and I was chipping a few golf balls. A guy walked over to me and starting having a go because the field is used for cricket in the summer and I was damaging the grass.

I felt I had a good defence; I’d seen many people down at the part doing the same thing, I was on the edge of the field nowhere near the cricket pitch, the grass was already in poor condition and hadn’t been prepared for the summer and anyway I was chipping the ball a few meters, not taking any divots.

But, I could tell this guy was not going to be reasoned with. No amount of logic would have made him change his mind. And I didn’t want to start debating this guy in front of my son. So I told him: ‘Look that’s fine, you’ve made your point and you can leave me alone’. And that was that; I defused the situation as quickly as possible. Was annoyed that I couldn’t chip any balls. Yeah! I thought what I was doing was fine but there was simply no point trying to convince this guy.

The point is, my goal was to defuse the situation and try and avoid the conflict before it got any worse.

Sometimes, the conflict can’t be avoided. And remember, conflict is a waste of time. So now the goal is to try and resolve the situation as quickly as possible.

One of the ways I do this is to accept full responsibility for the situation even if it’s not entirely your fault. This is something I learned from Jocko Willink’s book, Extreme Ownership. The way I look at it, if you own your mistakes and acknowledge what you’ve done wrong, you take the power away from the other person. If they accuse you of anything, you can simply say “Yeah, I’ve accepted my mistake, now how can we move on?”

It’s also just the more honourable thing to do. One of the reasons conflicts happen is because the other person wants you to realise what you did wrong. That’s why they’re having a go at you. If you try and hide from the conflict or deny any wrongdoing, the situation will only get drawn out for longer.

If you take on some of the responsibility, you’ll also encourage the other person to acknowledge their mistakes and do the same.

Surprise them with politeness

Something else I try and do is to respond as politely as I can. Partly because I think being a calm person that deals with conflict well is an admirable trait. But the other thing this does is it juxtaposes the other person. If they’re being really aggressive and confronting, they’ll be surprised and taken back by your politeness and maybe even calm down.

As Marcus Aurelius once said:

Sometimes I get people leaving me rude comments on YouTube. Fortunately, 99% of people that watch my videos appreciate them and are very supportive in the comments. But every now and then, you come up against keyboard warriors. I had someone recently leave me a rude comment because they couldn’t stand the way I talked (sorry buddy, there’s not much I can do about that). I can’t even remember what my reply was but I usually thank people for watching the video and for sharing their feedback and recommend they don't watch any more of my content.

I have a rule which is I never write anything on the internet that I wouldn’t say to someone in person. I’m not a rude person and I’ve never argued with someone I don’t know face to face and called them names. Responding with politeness is the best way to maintain your integrity and (hopefully) make the other person realise that they’re the one with the issue.

Make it right (even if you’re not in the wrong)

Even if I haven’t done anything wrong, I try and resolve the conflict by doing right by the other person. As mentioned, accepting responsibility is a good start but often you need to go a step further.

For example, if I get an email from a customer who’s unhappy with their purchase, I’ll issue a partial or full refund. Again, even if they’re in the wrong or they misunderstood something about my product, I take on the responsibility and want to make things right as soon as I can.

I don’t want to waste my time or reputation by trying to convince the customer that they’re wrong and I’m right. Especially if this is a customer that I’m going to be working with in person. I’d rather make things right by refunding their purchase so we can both move on and that way, I don’t have to deal with someone who’s unhappy with me. What’s nice about this particular example is they don't have a choice. If I proactively issue the refund, they can’t really keep arguing with me. I’ve resolved the situation for them.

Understand how to avoid the conflict again

If you haven't been able to avoid the conflict, the final step is to try and learn how to avoid it again in the future. As I talked about recently, adopting a mindset around avoiding repetitive tasks is a great way to be more productive. The same goes for avoiding conflict.

Having been doing consulting for 6 years now, I’ve learned that one of the most important aspects of a project is how the client is to deal with. I used to take any project I could get. Now, I’m very active about turning away work if it’s not the right fit for us or if I don’t get a good vibe from the client. We’re going to get work one way or another, so I’d rather work with clients who are friendly and pleasant to deal with.

There’s nothing worse than having the same argument again and again. You really need to be taking responsibility and learning from the conflict to avoid it happening again in the future.

How do you deal with conflict? If you have any useful tactics or tips, leave me a comment below!