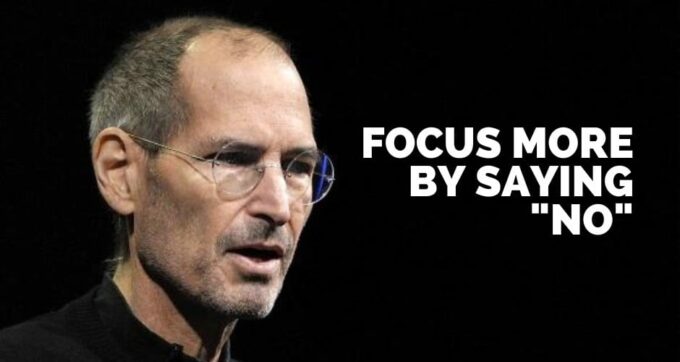 I was recently reminded of a great quote by Steve Jobs where he said:

“We try to focus and do very few things well. And focussing is hard because focussing doesn’t mean saying ‘yes’ it means saying ‘no’. So we decide not to do a lot of things so we can focus on a handful of things and do them very well”

And saying ‘no’ is something I’ve talked about before on the blog:

But this is one of those simple but very important lessons in productivity that often needs repeating.

If you’re someone who finds themselves saying “I’m too busy” or “I don’t have time” this is usually a consequence of a lack of focus resulting from saying “yes” to too many things.

Casey Neistat describes this really nicely. Rather than spending all your time and energy making a small amount of progress on a bunch of different things, it’s better to focus and put that effort into doing one thing as best you can.

And saying “no” is hard. As Steve Jobs said at WWDC in 1997 when you say no, you piss people off. Rather than pissing people off, we say “maybe” or “yes” to avoid the social awkwardness of saying “no”.

Saying “no” is one of the things I constantly remind myself to do:

Ryan Holiday has some great writing about saying “no”. Everything you say yes to is saying no to something else. If you say “yes” to going to a conference, you’re saying “no” to time with your family. Of course, the conference may be well worth going to. But you need to consider the opportunity cost of your decisions to decide if it’s worth it. He also has a great article about how to respond to people who request “just a little bit” of your time. I get at least a couple of these emails per week. People ask me to book a 15-minute call to demo their product or share an idea for a joint venture. Having wasted countless hours on stuff like this in the past, I’ve decided to simply say “no” from now on. That may mean saying “no” to some genuinely good opportunities but I’m fine with that if it means I save time in the long run. There’s no shortage of good opportunities out there and the really good ones tend to find a way of breaking through anyway.

Getting comfortable saying “no” is the best thing you can do to free up your time, focus on the things that matter and remove frustrating distractions from your life.