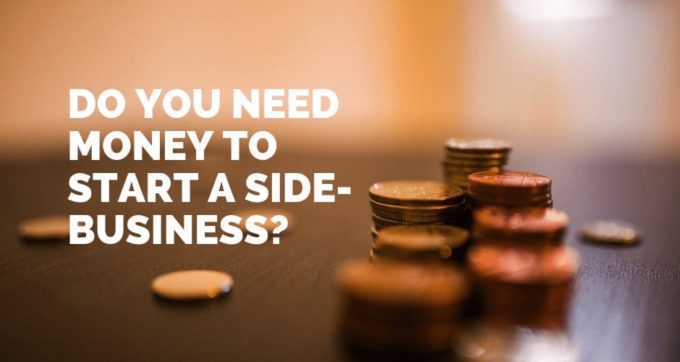 There’s a big misconception out there that you need loads of money to start a business. In fact, I think a lot of people use this as an excuse NOT to start a business to disguise the real reason why they’re not starting (often out of fear).

Sure, certain business require a lot of capital to get started. Space X couldn’t start research and development on rockets without some seed money. I’m talking more about independent workers, freelancers, consultants and coaches.

A few weeks ago, someone emailed me sharing how they were starting a freelancing business like mine but didn’t have “the big marketing spend”as I do:

“I began freelance consulting a few months ago and thus far it’s been a major flop. […] It’s clear you have a pretty decent marketing spend. I’m on a drip campaign as a new subscriber, AdWords boosted you to page one, etc. […] My family and I dove in with a little bit saved, but not enough to fund an aggressive marketing spend to hopefully attract clients. “

I was surprised by this because I do NOT spend a lot and it was weird to think that people think I’m spending a lot on advertising to generate an income.

Sure you can spend a lot of money on Facebook ad campaigns and marketing and this may even be profitable. But I’ve always prioritised minimising expenses as much as possible because every dollar you spend is a dollar not in your pocket. And I never really “invested” money to start my business either. In my opinion, you don’t need thousands of dollars to get started.

And when I talk about lowering expenses, I mean both financial expenses and the opportunity cost of my time.

So while I might be able to make a profitable income from Facebook ads, if it takes me 20 hours per week to generate this income and I have to sacrifice other, more profitable, source of income, then it’s not worth it.

I’ll tell you exactly how much I spend on advertising but first a little history.

Since starting my online business back in 2014, from day one I’ve always prioritised “profit first”. This is a concept developed by author Mike Michalowicz which reframes the traditional ideas of profit from:

The idea here is that you prioritise profit in your business and use this to budget your expenses. e.g. If I make $5,000 per month and I want to take home $3,500, then I can only spend $1,500 maximum to earn that income.

Without actually reading Mike’s book I’ve always prioritised “profit first”. For me, I knew I wouldn’t be able to quit my job until I was making a sustainable $3,500 PROFIT per month. So if I earned exactly $3,500, every dollar I spent would eat into the take-home amount. Therefore, I had to earn as much as I could while keeping my expenses as low as possible.

When I was first getting started setting up a website and figuring out how to get noticed online I spent money only on the absolute essentials:

For me (and most people reading this), $40/month isn’t a lot and you can get started easily by putting this on a credit card. If you have to, cancel your Netflix subscription and don’t buy takeaway coffees to save some money each month.

As my email list grew and I also start consulting I started spending a little more:

At the end of 2016 when I quit my job I was spending an average of $270/month to generate around $3,500 of income and still not a single dollar on “advertising”. That means my expenses made up just 7% of my income.

Then when I started travelling and had more time to focus more on the consulting that’s when I first decided to spend a little on advertising (but only as the income continued to grow):

To this day, I still spend as little as I can:

As you can see, my expenses would only grow as I earned more and could justify the additional expense (always keeping expenses to between 7-12% of the total income). There was never really an “initial investment” into the business.

Now that I’m earning more I can justify spending a little on things like a co-working space and the occasional contractor. Just last week I spent money on a contractor to help me with some tech website stuff. But in the beginning, I would have never spent money contracting someone. And even now, I make these decisions very carefully because every dollar you spend is a dollar not in your pocket.

Anyway, hopefully, this gives you an insight into what it takes to run a business like mine. You don’t need a lot to get started, that’s for sure.