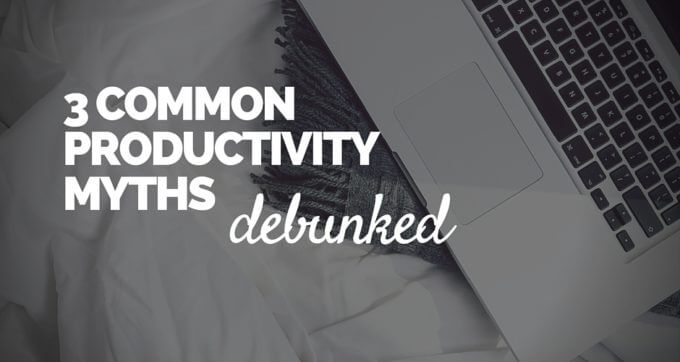 Everyone likes the idea of having more time. We’re a pretty motivated species and most people like the idea of accomplishing their goals in the shortest amount of time possible and having a good work-life balance.

We’ve already seen that it’s possible. I told you about Anthony who was able to quit his job, reduce his hours from 10 to 6 a day, more than double his income and how now Anthony spends more time surfing (if you haven't read about his story, I strongly recommend you do so now). In my own life, I’ve built this website and business completely on the side while maintaining a full-time job (and I still have time for reading, running, CrossFit and family).

It’s possible, but it isn’t easy. It takes a lot of time and effort to find what works and what doesn’t. It’s not easy because everyone is different, and what works for some people, may not work for others.

When I first got started, I would read a lot of blog posts about how to be more productive. And let me tell you, there’s a LOT of information out there. A lot the articles you’ve probably come across are really spammy and are only designed to get clicked on (to sell advertising) and don’t help you. Learning on your own from books and articles takes a LONG time (and that’s not very productive).

Being a techy kind of guy, I tried various different apps and tools but there are so many options. Should I use this task list or that one? What about calendar apps? Where does Evernote fit into all of this?

I was asking myself; How long am I going to spend trying to learn productivity and when will I actually get to start being productive?

I want to tell you more about the mistakes I made when I started out. There’s so much information out there and so many apps to try, I want to help you avoid some common pitfalls.

Here are the 3 myths that I see so many people fall victim to — and I want to help you avoid them:

Some people think the answer to increased productivity is to work harder. They think they’re not getting enough done because they’re just not working hard enough.

Oh man, this one is so dumb…

Okay, I’m not denying that hard work isn’t necessary, but you can’t just expect to cram more work hours into your day and expect to get a good result. Ever heard of the law of diminishing returns? This is the idea that after a certain amount of time, adding more inputs (work hours) doesn’t generate any more output. A Stanford University Study1 found that after a certain amount of time, we start to become less productive and our output decreases as stress and fatigue both increase.

Not only that, but this approach isn’t sustainable. That’s why people who just try to work harder end up going through cycles of productivity.

Have you ever felt like you go through bursts of productivity? You start by getting a lot done over a short amount of time and everything looks good. But then you get distracted, or your energy starts to drop and you lose motivation. You start to procrastinate and can’t seem to get anything done. Sound familiar? 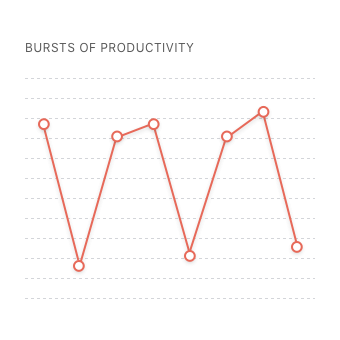 This is far less effective compared to making consistent progress that can be sustained over time. This is the goal you should be aiming for. 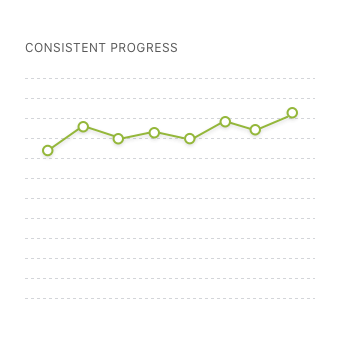 2. The “to be productive you need to use a ”method“ like GTD or work in short sprints using the Pomodoro technique” myth

There are lots of “methods” you can follow to be more productive. The problem is that these methods are suited to a very particular style of worker and are extremely rigid.

Take the Pomodoro technique, for example, working in 25-minute blocks might suit a manager who’s constantly jumping between meetings, phone calls and email. But writers, designers and other creative types are likely to work better when they can focus on “deep work” for a few hours without being distracted. The other thing that’s really annoying about the Pomodoro technique is this… what happens when you get to the end of a 25-minute Pomodoro, you’re really in the zone, nice and focussed… and your alarm goes off…. “time for a break”. Getting into the zone is so hard, why would you want to stop all of a sudden just to start all over again in 5 minutes?

Ha! That’s like waking yourself up just before you enter REM sleep just so you can go to the toilet…

Then there’s the Getting Things Done method. The GTD method is a very strict approach that’s not very easy to follow. In fact, many top productivity experts are now moving away from the GTD method to more customised approaches2.

The problem with GTD is that there are all these rules and processes you need to follow in order to maintain the system. Some people have had great success with GTD, which is awesome. A lot of the time I hear from people who start GTD and it works for a while, but because the GTD method is so strict, it’s really hard to adopt and you end up spending more time on maintaining the system and less time doing the work that really matters. 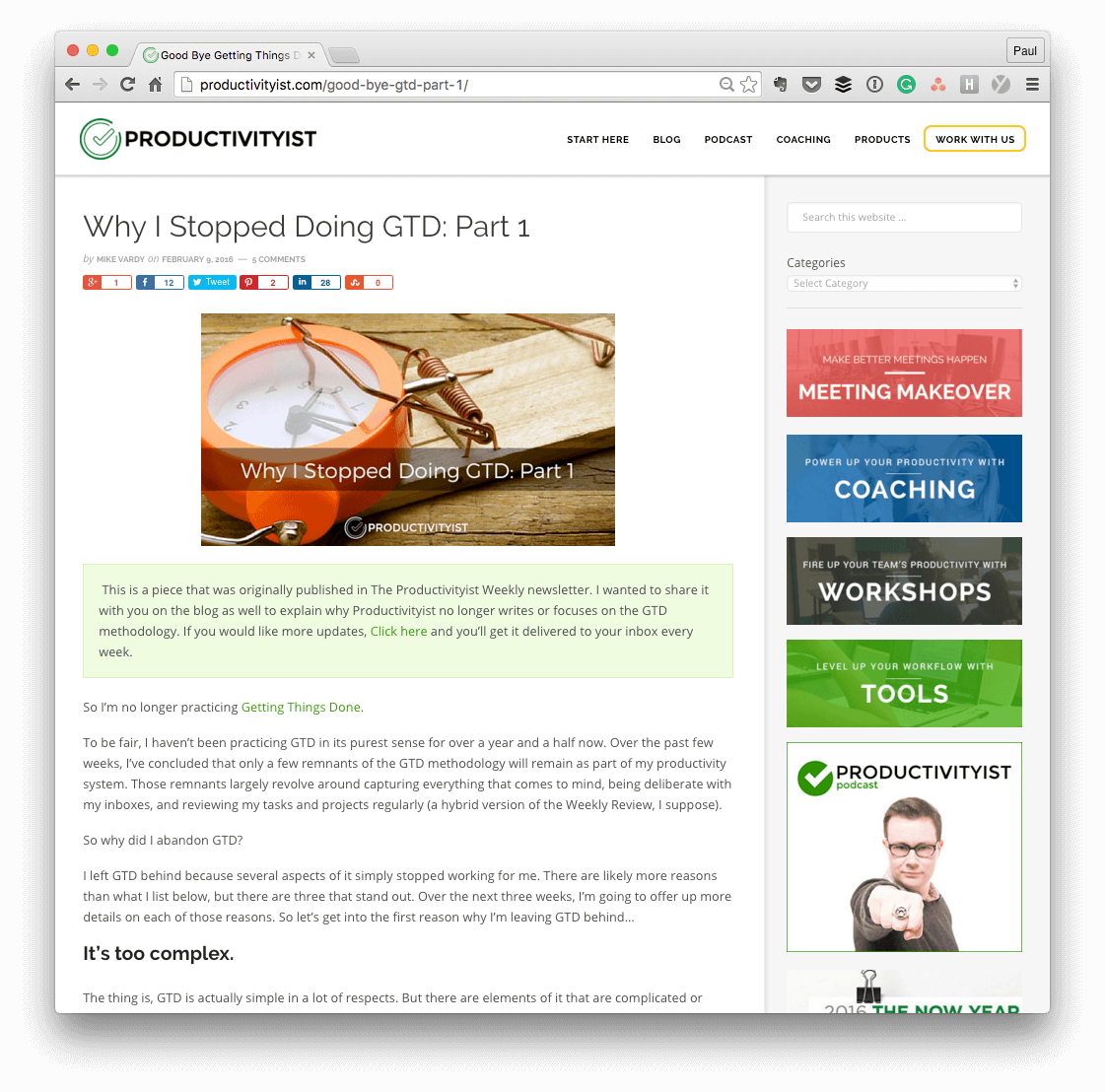 IMAGE: Productivity strategist Mike Vardy moved away from GTD in favour of a more customised approach.

I’ve tried the Pomodoro technique and I’ve tried GTD. These methods work for some people, but one size does NOT fit all. It’s much better to borrow tactics from different methods to create your own system. For example, I’ve borrowed a few ideas from GTD but only the things I like… this is the key.

More on that soon…

3. The “to be productive, you have to stick to a plan” myth

It’s crazy to think people think this will work. Of course planning and being organised is a big part of productivity. But let me tell you right now… regardless of how productive you are and of how well you plan out your day, you’re almost guaranteed to get distracted to have some emergency push you off course.

I tried the approach of planning 10 things to do each day. The first problem with this is that you need to know how long something will take to complete. This is of course really hard to do and it’s highly likely you’ll take longer (or shorter) than expected to complete the work.

The second issue here is that just because you can think of 10 things to do, doesn’t mean you should do all of them today. What’s to say your time wouldn’t be better spent focusing for double the amount of time on 5 tasks? Even if you could overcome these two issues, it’s highly likely that during the course of your day you’ll get distracted by emails, other people, “urgent” work and your plan quickly falls apart.

You should, of course, do what you can to eliminate distractions (which I’ll share more about later). But when it comes to planning, I’ve found it’s way better to have a flexible system that’s adaptable. So that if an emergency comes up, you can quickly adjust, address the issue and move on. It’s almost impossible to avoid distractions altogether. It’s far easier to manage the distractions…

Here’s what you should do instead

I’ve talked about why productivity is the secret weapon of the world’s happiest people and debunked some common productivity myths, now you need to take action and create your own productivity system.

Most people fall victim to these myths and waste a lot of time trying to find out “what works”. They think they have to follow strict models like the Getting Things Done (GTD) approach, they think they have to list 5 things they plan to do each day and work in 25-minute bursts using the Pomodoro technique in order to be more productive.

Instead, I’ve found it’s far more sustainable to develop your own productivity system that suits how you like to work so you can organise your mind, make consistent progress towards accomplishing your goals and create a healthier work-life balance.

I call this having a “Personal Productivity System”. I use the word “personal” because it’s all about creating a system that revolves around YOU. The best part is, when you develop your Personal Productivity System, it’s guaranteed to work. Why? Because YOU designed it and it’s based on how YOU like to work, so you’ll naturally start to become more organised and productive.

Next, we’re going to look at how you can start to dissect your goals and identify the individual tasks you need to complete to reach your goal.

For homework, leave me a comment and tell me one goal you’re working on right now! Be specific and give it a due date.